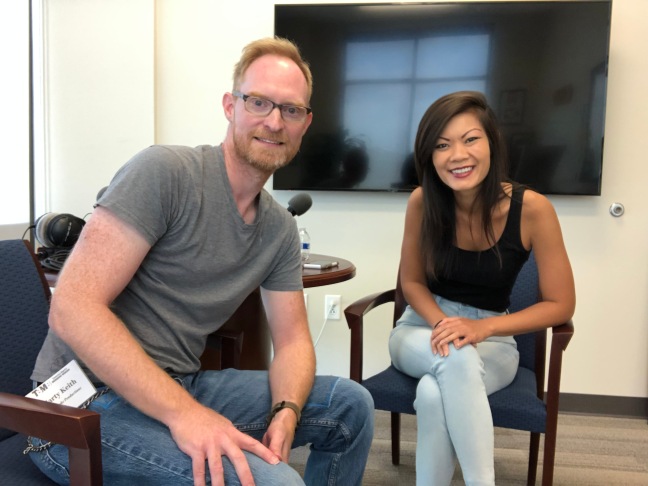 I sat down with my friend Elizabeth Chan who is a professional touring/session drummer and road manager. She has played for some of the biggest names in country and Christian music including: Carrie Underwood, Keith Urban, Lauren Daigle and Moriah Peters. On this weeks episode we spend time talking about how Elizabeth found her way to Nashville and the immediate doors that opened which allowed her to quickly work her way into position as an in-demand drummer and tour manager on the road.

*I sent a bunch of emails to different management companies I had contacts with from years ago. One manager actually needed a drummer for an artist. He said most emails get deleted automatically, but he felt like he should open the email.

*It was God’s grace that pulled all of that together.

*First artist to play for was CCM artist Moriah Peters at Disney World.

*The show at Disney had industry people there that I connected with.

*Blaine Barcus was Moriah’s A&R person and we connected and built a relationship and I got to know him and his wife. I wanted to learn more about his story, not for business.

*Be willing to be curious about people’s lives and know them for who they are, not what they do.

*That can lead to other opportunities because you add value to the person.

*There are amazing musicians everywhere, but the one thing that makes us all different is the character you bring to the gig.

*You spend most of your time with people on the road more than on the stage.

*If you’re not easy to work with or be around, no one wants to be with you.

*Likability is more important than talent.

*Create an outlet for working with something you believe in.

*Don’t sign up for something you don’t believe in.

*How did you get gigs after playing for Mariah Peters?  A person connected to an artist I was playing for would see me play and reach out and it would lead from one thing to another.

*A lot of times you get called for one show but then it leads to more work with that artist.

*Don’t fake it. Just show up as your authentic self.

*When I have time off, I fill up my time just listening to the music genre I am working in to be more familiar with it.

*Be very intentional at breaking a part grooves to learn how different genres work.

Elizabeth Chan is a touring and session drummer from New York City, currently based in Nashville, TN. She has worked with a variety of artists, including seven-time GRAMMY Award winner Carrie Underwood, country music legend Darius Rucker (of Hootie and The Blowfish), multi-platinum artist Keith Urban, powerhouse country trio Lady Antebellum, The Voice Australia finalist Ben Hazlewood, Billboard AC/CHR chart topper Hollyn, and 2014 GMA Dove Award “New Artist of the Year” Ellie Holcomb. Whether playing to anthemic rock and country melodies or accompanying folk and pop ballads, one this is consistently evident: There is never a lack of passion in what Elizabeth does.

Music has long been a part of Elizabeth Chan’s life. Growing up in Brooklyn, New York, Elizabeth became highly involved in the rich local music scene of New York City. Under the direction of drum teachers Paul Two and Phil Bloom, Elizabeth began diving into genres from rock to R&B, jazz to hip hop, and gospel to latin.

Elizabeth now resides in Nashville, TN. where she serves as a touring/session musician and tour manager for numerous pop, country and CCM acts.